Steemit's Internal Market is a place where you can buy or sell your Steem Dollars in exchange for Steem Tokens.

The Internal Market is an alternative to using the convert to Steem button found in the drop-down menu next to your dollar value listed in your Steem Wallet.

An example transaction of me converting (selling) Steem Based Dollars (SBD) to Steem Tokens and then finally, Powering Up by converting the Steem Tokens into Steem Power can be seen below:

When I clicked on the CONVERT TO STEEM button from the drop-down menu next to my SBD in my wallet I was presented with a warning: 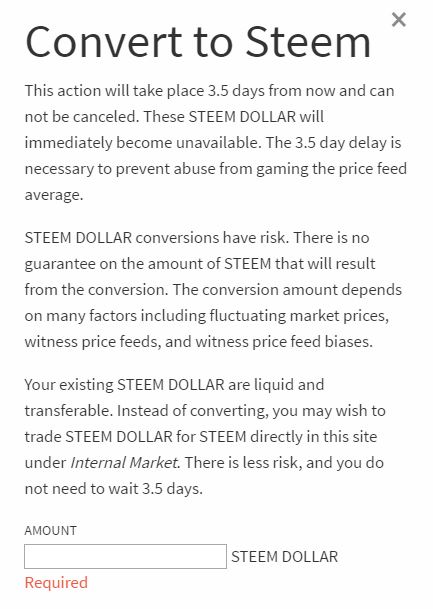 I was advised that since Steem is selling at above $1.00 USD, I should NOT use the CONVERT TO STEEM button but rather the MARKET button and I would get more Steem for my SBD.

NOTE: In order to perform transactions with your money, you will need to be logged in with your ACTIVE or MASTER keys.

Go to your WALLET and from the drop-down menu next to STEEM DOLLARS, choose MARKET (Sorry, I captured this image AFTER I had already moved my SBD so it shows zero SBD. It did show 12.199 before I converted it).

After clicking on the MARKET button, you will see a page that looks similar to this: 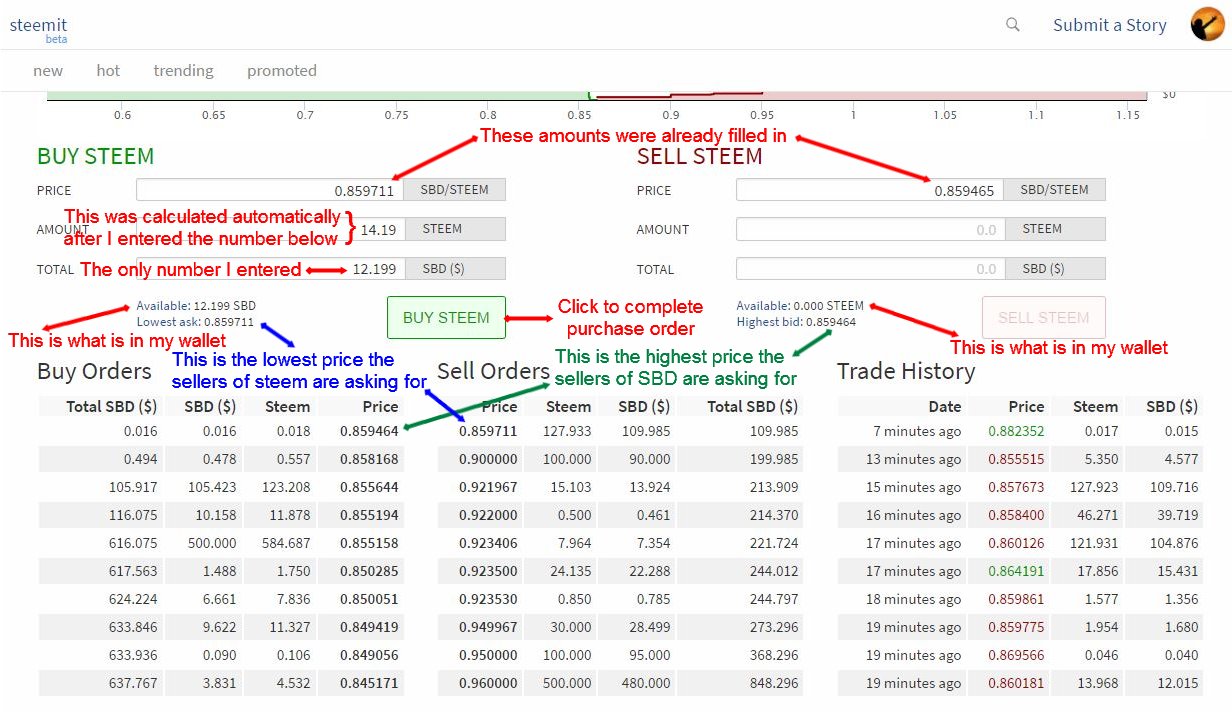 The graphs at the top show the total volume of trades made with $ on the X-axis and the price point at which the trades were made on the Y-axis. In the middle is the volume of trades that are just being made at the current selling price. I could be wrong but it doesn’t really matter that much to me because I don’t know what to do with that information anyway.

Under the graph are 2 columns. On the left in green is where you BUY STEEM (since I am selling my SBD for Steem, this is what I used). On the right in red is where you can SELL STEEM. The PRICE fields were already filled in for me and I left them at default (had I understood what I was doing, I would have lowered my price by a few decimal places to get a quicker deal). I left the AMOUNT field blank and entered the value of the SBD that I had to sell (12.199) into the TOTAL box. You can enter any value you want up to the maximum that you hold (shown as AVAILABLE below the TOTAL field box). After entering the TOTAL amount, the AMOUNT box was populated with a calculation of what I would receive in STEEM (note that I got 14.190 STEEM for 12.199 SBD). If you want to be more strategic, study the numbers that I commented on in blue and green in the image before deciding on what price you wish to try and get. You can also study the trades made in the 3 columns below the BUY AND SELL columns. The column on the far right indicates in red, trades made at lower than your asking price while trades made at higher than your asking price are in green. Seeing that people HAVE traded at higher than the price that defaulted into the PRICE field, I decided to give it time and see what happens.

After clicking the BUY STEEM button, I saw what appears to be my offer to buy at the top of the BUY ORDERS column. 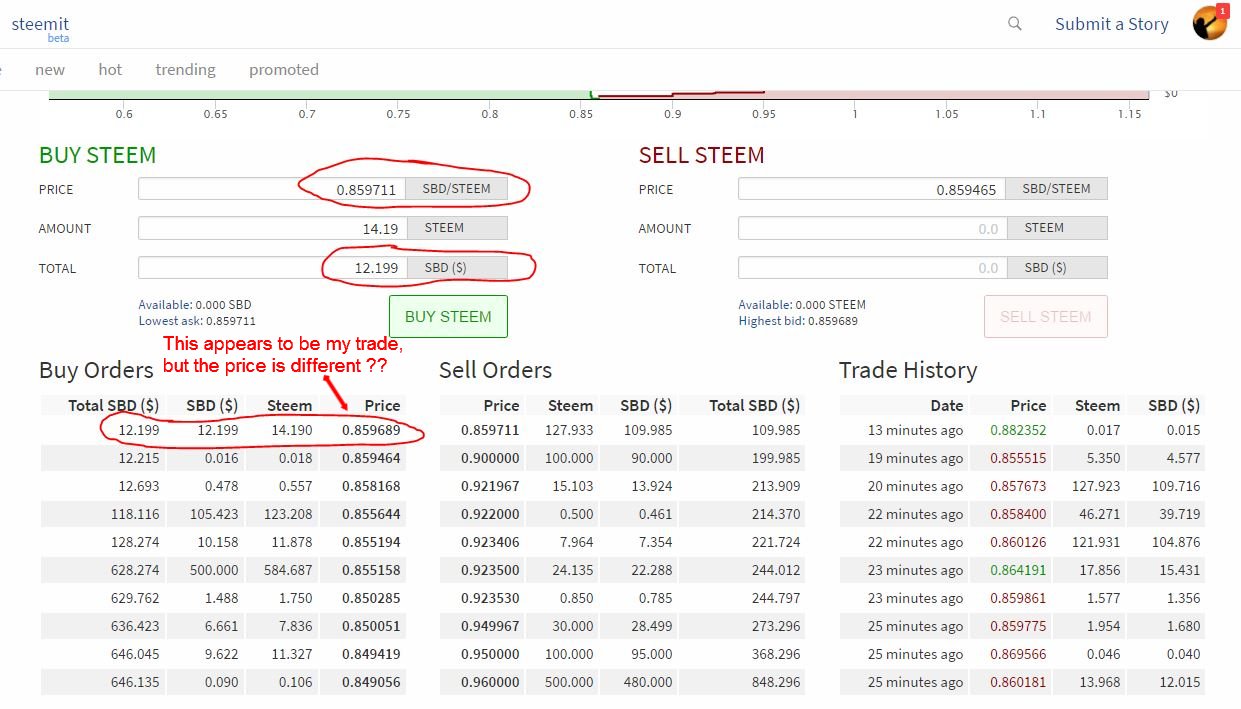 I don’t understand why the PRICE amount had a discrepancy. Perhaps it shows the price adjusted to the current average?

Below the 3 columns for BUY ORDERS, SELL ORDERS and TRADE HISTORY is a list for OPEN ORDERS. Here you can cancel your order if it has not gone through yet. (The price value changed again!)

After several hours I checked my wallet and at the very bottom I noticed that my purchase was made in 2 transactions an hour apart. All my SBD have been sold and I bought STEEM with them.

As you can see, I now have no SBD and 14.190 STEEM; the transaction had completed successfully!

The next step for me was to POWER UP. Still in my WALLET, I clicked on the icon beside the STEEM value and then clicked on POWER UP from the drop-down menu.

A new window popped up asking me how much of my Steem I wanted to use. I entered the entire balance.

After clicking on the POWER UP button, I now have zero Steem and zero SBD. Everything is in Steem Power.

Image credits: All images used were screen captures made by me @happyme